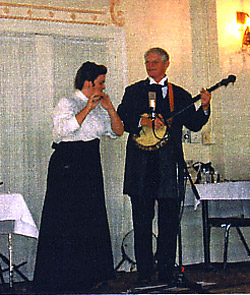 ​            Ballot Box Ballads: On the Campaign trail in song and story
Raise your voice and cast your vote and rally to the party. Whig? Democrat? Mugwump? Republican? Greenback? Bull Moose?! Whatever the party affiliation campaign songs were sung to win popular support for history's presidential hopefuls.

Long before television and radio featured "attack advertisements", "media blitzes" and "spin doctoring" during political campaigns, many of the same effects were achieved through campaign songs.

Suzanne and Jim present an entertaining and enlightening program of presidential campaign songs from the days of Andrew Jackson into the 20 th century. These songs are not simply historical curiosities. They document some of the enduring themes of the American political process and the social movements that underlay them. These catchy melodies captivate even modern audiences with the spirit of an old time election rally.

The Ballot Box Ballads program is entertainment suitable for election conventions and rallies, historic societies and museums, or for any audience that has an appreciation of the American political experience!
“Ballot Box Ballads - it was an excellent program and well received by the audience. The quality of the music was outstanding as well as an expression of the era it pertained to. The narrative was historically accurate and informative to the audience.”
- Professor Emeritus, The Defiance College, Defiance, Ohio