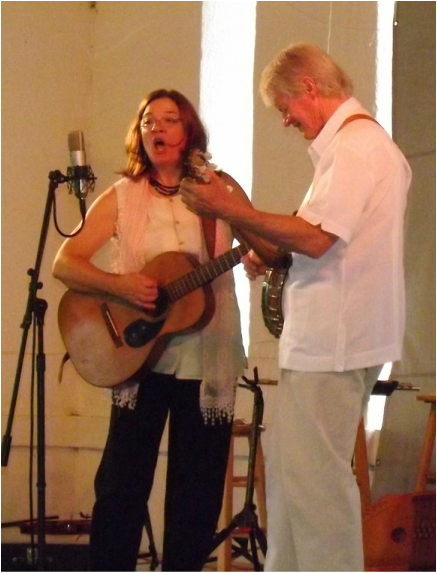 ​Sing! Sing! Sing!
​America has always been a nation of singing people from our earliest days as a colony and throughout our history. The songs sung by each generation have been a first-person narrative preserving and reflecting the social, moral and political issues of the times.
Sing, Sing, Sing compiles more than a century of our country's musical life - told in the voices of the farmers, railroad workers, miners, canal diggers and just plain folks.
Suzanne and Jim have extensively researched library collections of 19 th century popular sheet music, songsters and published collections including Carl Sandburg's American Songbag, Vance Randolphs' Ozark Folksongs and the Lomax's Folk Songs of North America. The program includes the works of great American composers such as Stephen Foster, Daniel Decatur Emmett and Woody Guthrie and songs of unknown origin - songs of ordinary people like cowboys and Irish immigrants who worked to build the new land.
From tin Pan Alley, the cabin porch or down the open trail Suzanne and Jim chronicle the American experience with splendid music, interesting tales and a touch of gentle, homespun humor.